If you’ve been following Smart Group Training for any time whatsoever, I’m sure you already know we’re all about the Functional Movement Screen (FMS) and the results it can deliver in your training programs.  We use it on a daily basis at our gym and we’ve had a TON of success by using this screening tool.  Honestly, without the screen, I’m not even sure where I’d begin with developing an individualized program anymore.  I hate being reliant on a tool, but the FMS is one tool I don’t mind hanging my hat on.

There are several reasons why I love the FMS, and the improved communication is towards the top of that list.  If I’m trying to discuss a training program with another professional, using the FMS’s scoring criteria drastically helps create an understanding of what’s going on with an individual.  If we’re talking and you’re able to tell me a client of yours has a 1/1 on the Active Straight Leg Raise and has another pair of 1’s on the Rotary Stability screen, I’m going to have a much better idea of what’s going on with that person. For those of you unfamiliar with the scoring criteria of the FMS, it’s pretty simple.  All the movements are scored somewhere between a zero through a three.

0 = Pain with the movement

1 = Major Limitations and Dysfunction with the Movement Pattern

Understanding the scoring criteria is the first thing you need to do when it comes to the FMS.  I’m not here to go over what’s a one, two, or three with this article.  We have that covered in our Performing and Scoring the FMS section on our blog.  You can find out how to score the FMS here. However, I do want to discuss the clients that score a one on any given movement pattern.

Since my return from the Perform Better Functional Training Summit in Chicago this last June, I see at the people scoring 1’s on the screen in a whole new way.  Charlie Weingroff, a huge believer in the FMS, helped paint a picture in my head that makes perfect sense.  During his presentation, he talked about something he called hard and soft.  If someone scores a one on the movement screen, he wants to know if the score is hard or soft.

Hard or Soft?  What the hell does that even mean?

Let me explain by giving an example.

John and Jane are new clients coming in to work with you.  You performed the FMS and found that both of these individuals have a pair of one’s on the Active Straight Leg Raise.  Sweet.  You found the weakest link…now what?

If you’re using the FMS and having great success, I’m sure you’re well aware that there are breakout screens/assessments that can help identify why the dysfunction is there in the first place. After performing these breakouts, you can usually find out if the dysfunction is a true mobility issue, or if the problem lies in stability or motor control.

Let’s get back to John and Jane.

This is what we would call a hard 1 on the Active Straight Leg Raise.  If you’re a hard 1 on the screen, this simply means there is something going on in the body that is preventing full range of motion or inhibiting the movement pattern.  It could be one, or a combination, of multiple factors leading to the mobility issue like: soft tissue restrictions, trigger points, scar tissue, bony restrictions, and structure of your joint capsules.  Some of these things can be changed, while others are never going to change without surgery.    The important thing to know is that there is something going on in the body that’s limiting the pattern.    When you get a hard 1 as a trainer, a good physical therapist or chiropractor can be your greatest friend.

Remember, Jane also scored a pair of 1’s on the Active Straight Leg Raise.  Being that both her and John had the same weakest link, we did the same breakouts we did w/ John.  However, the results were different…

John wasn’t able to touch his toes, standing or seated.  Jane, on the other hand, could.  She was able to touch her toes both standing and seated.  When we checked John’s straight leg raise passively, it was the same as his active straight leg raise.  When we checked Jane’s, it was substantially different.  She was able to go another 20-30 degrees passively.

After doing these simple breakouts, we were able to find out that Jane is what we classify a soft 1 on the Active Straight Leg Raise.  She’s still a 1 on the screen, but her training and corrective strategies are going to be different than John’s.  If we’re working with John, we’re going to need to address the tissue restrictions and joint limitations before training.  Maybe we can’t change something.  Maybe John has a spike in his leg that he has to get surgery on (true story).  Cool.  We just need to know this because now we can program around that.   If we’re working with Jane, we may take a different approach.  With Jane, she has the freedom of her joints and body to move in the way we’re looking for.  She just doesn’t have the stability or motor control to translate that into good movement.

We’re in the process of building out a section on the blog that covers these breakouts in depth.  You can check out the breakouts and determine if someone is a hard 1 or a soft 1 on the screen.  Understanding this truly helps separate yourself from the rest of the pack and will dramatically help improve your results.

Check out the one we did on the Active Straight Leg Raise here.

Hope this helps!  It’s been pure gold for me!

Do What You Do, Get What You Get

We had the privilege of having Steve and Jared visit us up here and participate in one of our team meetings here at Get Fit NH. The hour and a half we spent reviewing the FMS and getting input on the way these two experts score was worth its weight in gold. As we went over each screen in detail and as Jared screened Nancy, each of us also scored the screen. After each of the 7 movement patterns we compared our scores with Steve and Jared’s. If you ever have the chance to do this I would highly recommend it, no matter how good you think you are at the FMS. We learned a lot, and we have been doing this a long time. 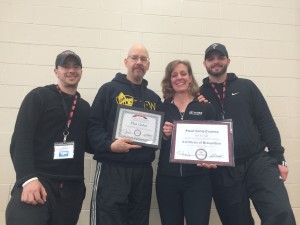 At our informal “Q&A,” after the screen was complete, we got into the inevitable discussion about correctives, and Jared said something that really hit home.

“If the correctives you are doing are not working after a couple of weeks, they probably aren’t going to. You need to find what does.”

We then discussed strategies on how to break out the pattern further to identify what the issue is. You can see an example for the ASLR here: http://smartgrouptraining.com/fms-active-straight-leg-raise/#more-1599

But back to the money quote “If the correctives you are doing are not working after a couple of weeks, they probably aren’t going to.”

Another way to put it is the title of this article.

“Do What You Do, Get What You Get”

That is not just true of movement patterns, but really it’s about all of life. You can’t keep doing the same thing over and over again and expect different results than what you have been getting.

We see it with our clients all the time, right?

Sally wants to lose weight, but she won’t change the way she eats.

Mike knows he needs to get more sleep, but he won’t turn off the TV at night.

Krystal says she wants to get stronger, but she also keeps picking up the “baby” weights.

Kind of low hanging fruit to be critical of, isn’t it? But think about it. They come to you because you can help coach them through their challenges. They need your help.

And are we as coaches really any different?

We want better businesses, to make more money, to have more time freedom, and to get awesome results with all our clients.

So are you getting the help you need?

Look, I’ll admit it. For the first few years of my career I thought I knew it all when it came to program design and getting better results for clients. And we did a pretty good job. But I think one of the best skills we can have as coaches is knowing that there is always someone smarter than you, and if you study the way they do things, you can get smarter too. You don’t have to reinvent everything.

And that’s also why we have worked with mentors like Pat Rigsby and Fitness Consulting Group. They know more about running a successful business than we do.

That’s why we changed our screening procedure when we learned about the FMS. They were doing assessments better than we were.

That’s why when Smart Group Training was started, we started adopting SGT methodology. They did it better than we were doing it.

Admitting that someone does something better than you doesn’t diminish you as a coach, it makes you better as a coach. And if you don’t want to get better, do us all a favor and consider doing something else.

So here’s the challenge.

Pick one way today you can break out of any “Do What You Do, Get What You Get” pattern you may be trapped in.

And if you want to get better at training your clients, you owe it to yourself and to them to become an SGT Certified Facility. The next few years are going to be crazy in this industry, as poor trainers get weeded out and excellence rises to the top. Your competition is getting better, are you?

When you first start using the FMS and the Smart Group Training System a lot of times your not sure which correctives to use to get the best results. We have made that a lot easier by giving you a lot of great ideas in our blogs and products, but we understand that there are a lot of exercises out there, and a lot of different situations that can occur that making picking the perfect corrective exercise a shotgun approach.

Although creating a blog post to make sure you pick the perfect corrective exercise every time is absolutely impossible, there are a few things you can do to make sure to make sure the shotgun approach is more like a sniper riffle.

What a lot of people don’t know about the FMS is that after you find the weakest link in the hierarchy by going through the 7 foundational movements there are ways you can break out that weakest link to get a better idea of what the issue is and how to fix it.

I’ll be covering these breakouts plus a few bonus breakouts of my own that I’ll often use to make sure my corrective exercise selection is as effective as possible in this newest series called Breaking Down the FMS.

Today we start with the Active Straight Leg Raise