When I first went through the Functional Movement Screen in 2008, I scored a 1 on the active straight-leg raise test. 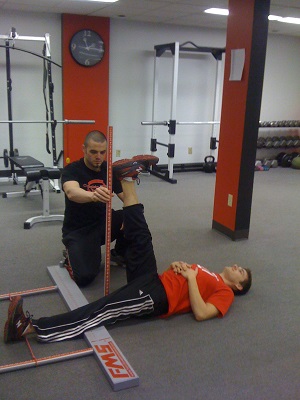 My hamstrings have always felt tight, so I was not surprised I received I low score.

But I didn’t expect to receive a score of 1 for the trunk-stability push-up.

Anyway, I started doing some basic corrective exercises for the active straight-leg raise, per the corrective hierarchy prescribed by FMS co-founder Gray Cook.

Once I began performing the exercises, I realized my hamstrings felt tight, but my quadriceps cramped and my core fatigued well before I could elicit a stretch in my hamstrings.

I knew my core wasn’t firing properly because of my failing score on the trunk-stability push-up. 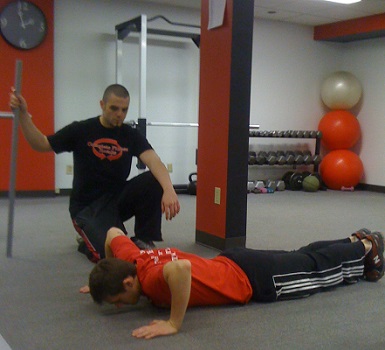 As I performed these correctives more often, my quadriceps cramped less, my core seemed to get stronger and, most importantly, my hamstrings “loosened” up. Eureka!

I was able to get stronger, improve stability in my knees and train they way I desired without worries of re-injury.

At my facility, we use the FMS to screen all our athletes. Many of them have failing scores on the active straight-leg raise.

So we take them through corrective exercises that address not only hamstring mobility, but also core stability and the strength of opposing muscles.

We have hadn’t had a non-contact knee injury among more than 100 athletes in two years.

We did have one contact injury from an athlete who had torn his anterior cruciate ligament prior to training with us.

He thought he had re-torn his ACL, but he discovered he had only a ligamentous sprain upon receiving an evaluation from a sports medicine doctor. Both the physician and the athlete’s parents credit our strength-training program for preventing another ACL tear.

He was able to play his junior season of high-school basketball and will play high-level club soccer this spring.

I am eternally grateful to the FMS for helping us correct dysfunctional movement patterns in our athletes so they can compete pain-free.

So my objective isn’t to prevent all knee injuries. It is unrealistic to expect athletes to suffer no injuries during competition.

My real goal is to educate athletes, parents and coaches on methods to reduce the likelihood of injury and expedite rehabilitation so athletes can return to the sports they love with a significantly reduced potential for re-injury.

If only I had known all this when I was in eighth grade, I may have had a much longer competitive career. But since I didn’t, I’m starting a support group!

Getting More Referrals From Doing Less